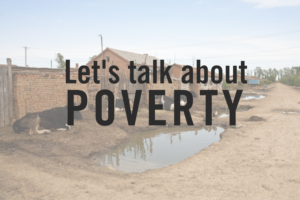 Let me introduce you to my friend Carlos. Carlos is a subsistence farmer in a developing country. Everything his family eats or sells comes from what they can produce on their two-acre plot of land (about the size of a large home lot in the USA). When necessary, Carlos will also take on temporary jobs.

Carlita, his wife, works hard as well. Not only does she do all the housework, take care of their four children, and work with Carlos on their farm to provide for their family, she also sews and does some odd jobs around the community to bring in some extra income as well.

Carlos and Carlita work hard. However, their land is on the mountainside and sloping. They can’t afford the really good lowland farms where the better crops are grown. They built their two-roomed bamboo/wood framed home with the things they grew and harvested from their own farm. Simple, but enough for their family of six. They love their children and do all they can to make sure they can go to school and get an education. They believe education is an opportunity for their children to have a better life.

If you and I (as outsiders) were to visit Carlos and his family, our initial reaction would probably be that this family (like many others) lives on the edge of poverty. They have food and income in good times, but in times of stress (drought, major sickness to a family member, etc.), things can be hard–even desperate. They have survived this way for years. In fact, their parents and grandparents survived this way as well. We would probably (at best) call them “working poor.”

So why is Carlos poor? As discussed in our previous blog post, Brent Myers has developed various categories that explain the reasons why poverty exists and persists.

Or maybe, we would assume that Carlos’ poverty is due to sin and judgement on his community/country.

As you can see, from an outsider’s perspective, we could jump to any of a number of conclusions or reasons as to why we think Carlos is poor.