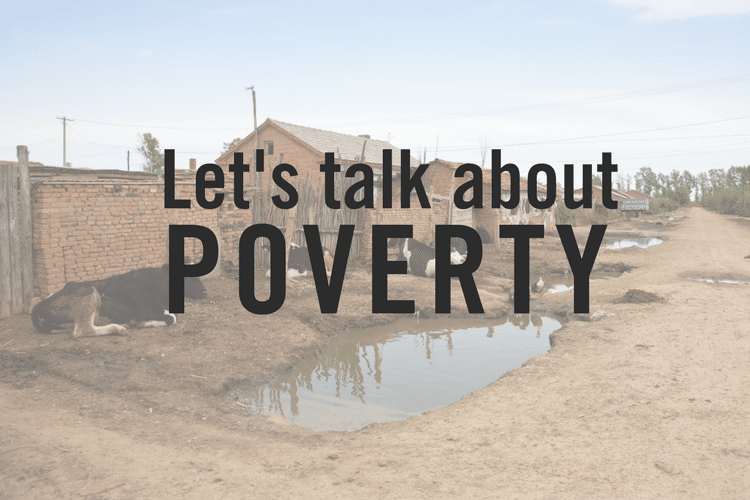 According to Bryant Myers in Walking with the Poor, the causes of poverty are generally broken down into four major categories.

People need food, shelter, water and clean air. They need an environment that supports life. Money, land and livestock are helpful assets. Poverty results when these things are wholly or largely absent.

Jared Diamond’s book, Guns, Germs, and Steel, claims that geography, quality of land, climate, and native plant species are the greatest factors that allowed some societies to become dominant over others. In The End of Poverty, Jeffrey Sachs championed the idea of the rich providing these basics of life to the poor as a way to end poverty in our generation.

A system of large-scale social practices and social roles, often firmly approved by the members of society, generally perpetuates injustice and misery. Some sectors of society tend to play “god” in the lives of the poor by creating a web of lies. Many authors have shown that inadequate worldviews (a key component of social beliefs) are the major contributor to poverty.

A great example of this view is Lawrence Harrison’s Underdevelopment Is a State of Mind. He compares countries and places with the same access to physical resources; one fails while one succeeds due to (according to Harrison) socio-cultural differences.

Some causes of poverty have to do with the mental condition of the poor. At the simplest level, it is obvious that poverty is caused in part by lack of knowledge and technical information. However, we need to remind ourselves that poverty can go deeper and can exist within the mind and spirit in form of a poverty of being. The identity of the poor can be so marred on the inside that there may be no hope of moving out of poverty. In many cases, the poor individuals and communities actually blame themselves for their own poverty.

These causes are often overlooked by development academics but are possibly the deepest roots of underdevelopment. Not only spiritual practices by individuals and communities (such as purchasing charms, favors, curses, etc.) can lead to poverty but the whole struggle in the spiritual realm against the father of lies and the principalities of the evil one who cherishes people in poverty, ignorance and darkness.