No Room: A Story of Venezuelan Refugees 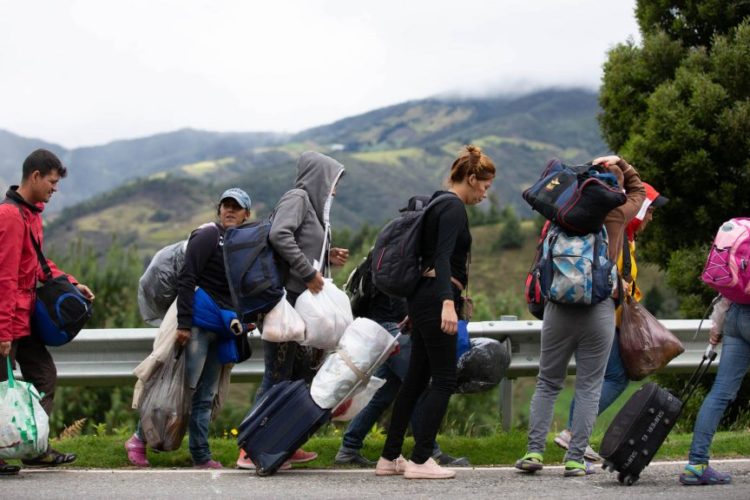 According to the UN, the Venezuelan migration has now reached three million, or one in every twelve Venezuelans. As the crisis continues, BGR partners are working both in Venezuela and in surrounding countries to provide aid. One BGR partner, Elizabeth Dudley, tells her story in this moving narrative:

A Plaza in Colombia

Darkness and complete night descend rapidly on the small plaza. A penetrating drizzle steadily drips its cold wetness onto the cold stone floor. About thirty-five men, most in short-sleeves or sleeveless shirts, huddle under the only two trees. Rain sluices off the trees onto them. Two young women scurry to pull together a quickly improvised “tent” composed of black plastic trash bags, at the same time attempting to keep dry a small girl in fuzzy footsie pajamas. They select the top step of the plaza, against the long low wall of a closed building. Rain runs off the roof onto their shelter, collapsing it. Under the narrow, arched lintel of the building’s closed door, a young couple sits in utter physical exhaustion, leaning as far back against the closed door as possible, their legs from the knees down with nowhere to go but out in the rain. Between their two bodies they try to shelter their eight-month-old son. All those at the plaza are getting wet anyway.

This place is the first Colombian town of any size on the route up, over, and along high the Andean cordillera on the arduous route from the Venezuelan border, across Colombia to the Ecuadorian border, across Ecuador to the Peruvian border, across Peru to the capital, and – for some – across Peru to Chile or Argentina. It represents only the first few days of travel by foot for Venezuelans fleeing the spectacular, precipitate, and surreal collapse of their nation – once one of the wealthiest on the continent. It is mid-September. These men, women, the little girl, the baby boy are all on the first stage of a 2,700-mile trek by foot.

They are only a handful of the two hundred to five hundred Venezuelans who pass this way every day of the week, some pushing the elderly in a wheelchair, many carrying a baby or child, a number well along in their pregnancy, nearly all dressed for hot climates. Most have no money, no food, no connections outside of Venezuela. They have not eaten well for a long time in their home country, where a month’s salary will only buy two days’ worth of food. They have sold their homes and belongings to pay for bus fare across Venezuela to the Colombian border – if they are fortunate. Some cannot even do that, so walk a week across Venezuela to the border – before beginning their long walk over multiple countries.

Here in neighboring Colombia, each Venezuelan on this dark night on a mountain plaza is hungry, thirsty, cold, and wet. They have been walking steadily upward on the mountain highway for anywhere from two to four days. They carry with them everything they own in a backpack or rollerboard: perhaps a change of clothes, perhaps photos of family left behind, perhaps work boots a for hoped-for future job. They come from flat, hot plains or the sultry coast. They have never known cold – no more than what would be felt by opening a refrigerator door to get something out. They have never slept on the ground in a public plaza.

They have no coats, no jackets, no gloves, no sweaters, no scarves. Their socks (if they have any to begin with) and shoes are already in tatters. Their footwear is flip flops, cheap loafers, or low-cost tennis shoes. They are all headed toward a 10,000-foot mountain pass where at least eighteen of their compatriots have recently died of hypothermia and exposure. They have no preparation, no resources for this appalling journey, and no idea of what lays ahead.

Hope in the Night

Their survival depends on strangers. Some strangers are kind. Others are not. In a growing atmosphere of xenophobia against Venezuelan immigrants, some people are turning against them, are slamming doors shut. In this town, this particular night, the townsfolk are in their cozy homes, eating dinner, preparing for a warm bed. They have seen floods of Venezuelans pass their shops and homes, all tired, all hungry, all penniless. It is time to look away. There is no room. Not tonight. Not for them.

Then the small miracle comes out of the night. A van pulls up across the street. From it descend a weary band of missionaries. Since early morning they have been driving up the mountain, stopping each time they see a group of Venezuelans, getting out, having the Venezuelans put down their heavy loads and sit for a moment while the Christians give them hot sandwiches and hot chocolate, bind up their battered shoes, give out mountain clothing and gear donated by Colombian believers, hear their stories, tell them a story – one of God’s stories – share information to keep them well, pray for them and encourage them along the way.

This is the last stop. For eleven hours the missionaries have been doing this. For eleven hours they have heard and seen one heartbreaking story after another. The sixteen-year-old who has left home alone in order to find work so as to send money back to six younger brothers, so they can eat. The elderly man who has worked the soil all his life. There are no seeds now, he says. No jobs. He hopes someone will let him work their land and give him enough to eat. The woman in her fourth month of pregnancy whose intention in leaving is that both she and her baby live. The teenage girls walking to a 10,000-foot pass in capris, sandals, and summer blouses. Now, heading back down the mountain, the missionaries are fifty miles from returning to the border and this is the last stop.

The group of men on the plaza comes to life as they realize that food – FOOD! – is being offered to them. Food . . . and HOT CHOCOLATE. The two women receive their sandwiches and drinks, warm jackets and scarves. Expressing thanks, they quickly retire with the little girl to their reconstructed trash bag tent. The men are reluctant to let the missionaries leave. They will get just as wet under the two trees as standing in the middle of the plaza. Here are people with jackets for them. More importantly, people who see them as human beings and who have been where they are going are informed. “Will it be colder further on?”, the men wonder. “Can anywhere be colder?” They are still at 7,500 feet. Another 2,500 feet in elevation to reach the pass, where nighttime temperatures range from 36 degrees to below freezing. A practical tip from the local pastor: Don’t go hot and sweaty into the mountain heights, a sure way to get bronchitis. Cool off first. A tip from one of the missionaries: Save the foil from the sandwiches. It can keep your hands warm.

A few feet away, the young couple is too exhausted to move one more step. They barely have the energy to extend their hand for the sandwiches, a double batch for their little family. All day and evening the missionaries have zealously guarded their one child-size blanket, watching for that child who most needs it. Now the pink crocheted blanket wraps their little boy. It is warm. It is good. The father sits under the lintel with his wife and child, completely unable to care or provide for them in any way. As he takes his first sip of hot chocolate, the hot tears begin to flow down his face and will not stop.