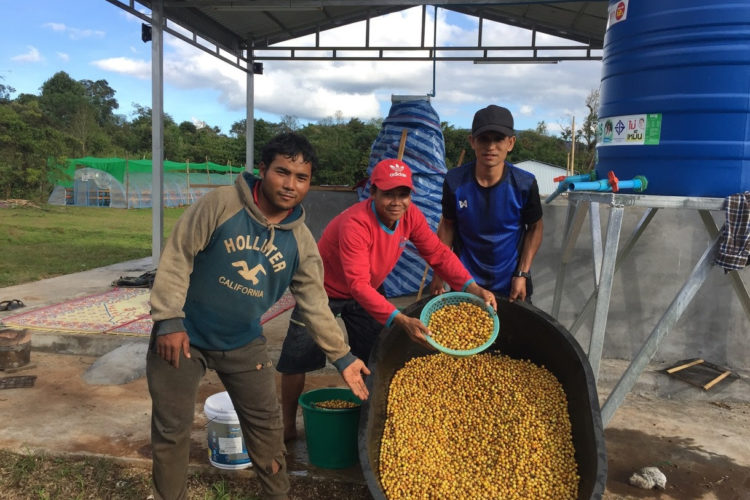 On a cold night at a Southeast Asian coffee mill, Touby swings his feet over the edge of a large water tank and plunges in. He’s up to his waist in bobbing coffee cherries, and he’s volunteered to skim off the defective ones floating on the top.

Touby is the type of guy willing to jump into anything and give his best. In fact, he’s seizing the opportunity to become a coffee farmer after you helped supply him with seedlings.

A small gift like a seed kit from the BGR Christmas Gift Catalog could be all the go-getters like Touby need to start a business, provide for their families, and transform their lives.

Touby wanted to provide a decent life for his family.

When you donated to help the mill purchase coffee directly from local farmers, Touby was just a day laborer living with his wife and small child in his father-in-law’s house. He had one goal: build a home for his family. He came to the mill as often as he could for work. Touby’s tenacity paid off, and he was finally offered a part-time position.

He quickly proved to be a valuable hire, ready and willing to help with any task. He saved up his salary and built a bamboo house for his family. During that time, another bouncing baby was born.

If Touby’s story ended there, it would be enough to praise God that he now has steady work and a home for his family. But Touby is always looking forward. And he was ready to jump headfirst into something even bigger.

Touby saw your gift as an opportunity.

Touby noticed how the mill purchased coffee at a higher price and realized that by growing his own coffee and selling it to the mill, he could make more money. That meant improving his home for his growing family.

So, when the mill used BGR funds to grow and distribute 10,000 high-quality coffee seedlings to locals, Touby jumped at the chance. He received 1,000 yellow caturra seedlings and planted them all within a week, dreaming of plump yellow coffee cherries, like shiny lemon drops. When staff at the mill asked him why he wanted the seedlings, Touby told them he was excited to try to grow something new.

It will take a total of three years before Touby can look forward to his first harvest, but he has patience. He knows that perseverance and hard work can pay off.

Now, Touby’s seedlings are thriving, and he’s praising God for many blessings.

In the meantime, Touby has landed a promotion at the mill! He’s now the full-time assistant farm manager and heads up the quality control for the coffee cherries purchased from local farmers. He’s even become a pillar in his church, leading worship services and Bible studies every week.

Touby took a small opportunity that you helped provide and became a leader in his family, job, and community.

At BGR, we’re inspired by hardworking, self-made entrepreneurs like Touby. We know you are, too. Here’s how you can continue to be a blessing:

Pray Touby’s coffee seedlings will grow and mature, allowing Touby to see his vision for life come to fruition.

Give $10 in the BGR Gift Catalog toward seeds that may one day become a fulfilling livelihood for another man or woman.