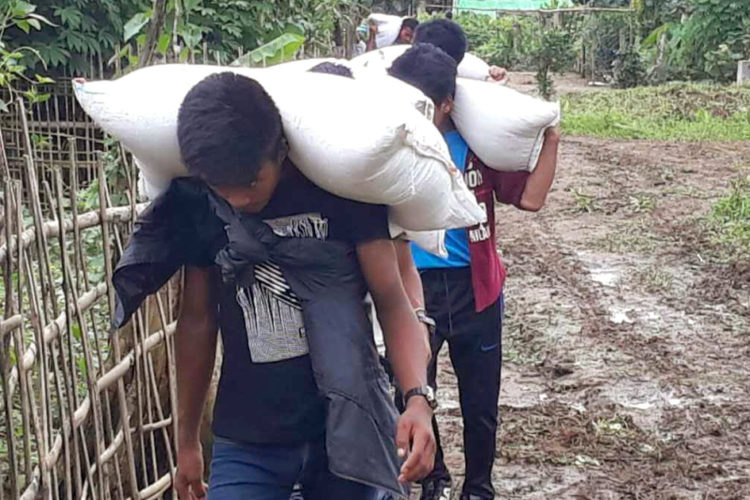 In one day, they abandoned everything. They left their homes. They left their animals. They left their sense of normalcy. When the people of Htin’s village heard gunshots, they grabbed their families and ran. Now, a year later, Htin says the food friends like you sent his community has given them hope that God can restore their lives. Read his heartfelt story below.

Just over a year ago, we heard there would be a conflict between two opposing military forces in our region. We didn’t know our village would be at the heart of this battle. We were shocked when, early one dawn, we heard bullets flying and mortars exploding all around us. Some bullets went right through our bamboo house.

We had been in our village for many years, during which time we had established our homes, had raised pigs and chickens, and had farmed rice and other crops to feed our families.

All through this time, we were never bothered by soldiers or rebel forces. Then suddenly, that all changed when our village area became a battle zone. Sadly, few of our 39 families had time to gather clothing or food before running toward the nearby river, away from the gunfire.

I grabbed my wife’s hand and placed our small son in a basket. I carried him with a strap around my

Shoulders, and we crept through the woods, going downriver until we came to a safe crossing.

We slowly made our way to another town, where our friends and neighbors also sought safety. Some had gunshot wounds and were treated at a small government clinic. Seven local churches in the area took us in for a few days and helped us secure land for temporary shelters a few miles outside the town.

But, a year has passed, and there still is no peace. A few folks snuck back to evaluate the situation and were shocked to see that all the houses had been ransacked and were in shambles. Livestock had disappeared when troops from either side took advantage of our absence and snatched up chickens, pigs, and even a few cows. All of our grain stores were gone. Everything about the village was in ruins. When those scouts returned, we knew we had no hope of ever going back to resume our lives there. It was over. We had to consider our previous possessions a total loss. But, our family members were safe, and for that, we gave God praise and thanks.

I immediately sought any kind of work I could. I found dangerous work as an amber miner for a small outfit. My pay was 25 bushels of grain for a whole year’s work. That amounts to $240 per year, or just about $20 per month. That was enough to feed me daily rations, but I had nothing left for my wife, three kids, or any other needs. My wife worked diligently to plant beans and squash and whatever we could get in the small yard around us. Part of the time, she sought periodic work in a nearby community on a day by day labor route.

Then one day while I was at the mine, I got word from my wife to come home quickly. She wanted me to witness the greatness and goodness of God. So, I rushed back to our tent-shack in the village. As I got close, I noticed people had gathered in front of the small shelter we had put up for a chapel. It was filled with stacks and stacks of rice bags all around the inside space. I was stunned.

Where was this from? How did this happen? Others said, “Oh, this is what GOD has sent us to rescue us from disaster.” With awed disbelief, I immediately recalled what my wife had said about trusting God and going to Him for our needs. The rice stacks were an answer to her prayers—and to mine, too.

My family and I want to thank God and those who have supplied this food. You rescued us in our time of unbelievable hardship and need. May God bless you for sharing.

(This testimony is a translation of Htin’s personal account, but it also includes background info added by a BGR partner. It has been edited for length and clarity.)