Food relief rescues pastor’s village the day after his death 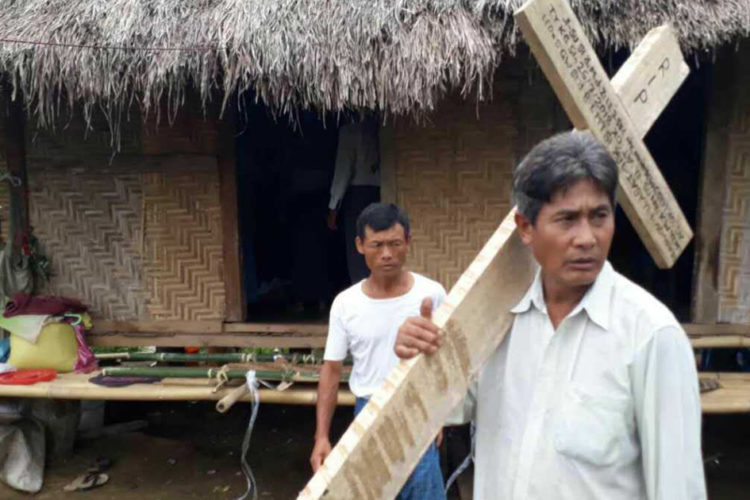 God’s timing is miraculous. If you need proof, consider the three hundred bags of rice, salt, and oil stacked underneath a tent in a small village in Southeast Asia.

The tent is a placeholder for the church Pastor Thiha was planning to build in his community. The rice is a gift that will help his community—and his family—survive in the coming months. Pastor Thiha didn’t get to see either of those dreams realized before he died. But, you helped him remember that God is a gracious provider, even in the final moments of his life.

To call Thiha a faithful servant would be saying too little. Thiha’s country has been troubled by war for years. In one village, Thiha’s oldest son and two other boys—14 at the time—were captured by rebels bent on snatching new recruits. The boys made a daring escape home, and the family left for the safety of a new town. Thiha, knowing he must continue his ministry, left his oldest son to finish his schooling in the care of relatives.

Despite the risks, Thiha followed God’s call to lead and pastor in village after village. Thiha relocated his family four times within ten years to serve. Each site brought its challenges. In one remote village, a steady supply of food was hard to maintain. Thiha’s family farmed when possible, and raised a few chickens and pigs for additional food. Church members blessed him with what rice they could. It was barely enough to get by.

Still, Thiha and his family made a home in the village. Two more children were born. They lived and labored side by side with families struggling to raise enough food.

It was here that Thiha’s dizzy spells began. They struck unpredictably, unexplainably. With no nearby medical facilities, he shook them off and pressed on with the work at hand.

Soon, there were much larger concerns. The violence creeping across the nation found its way to Thiha’s village. Early one morning, bullets and screams pierced the air. Thiha grabbed his wife and three small children and fled to the forest. There was no rescuing their pigs and chickens. They didn’t have time to see what became of their friends.

At the river bank, Thiha piled his family onto a small bamboo raft and silently pushed into the slow current. For three days, they floated almost wordlessly, fearing to draw attention to themselves. They were starving. Boiled jungle plants did little to fill their empty stomachs.

When they finally disembarked near a town downstream, they were overjoyed to be reunited with thirty-nine of the original forty-four families from their previous home. The other five were headed for families in other cities. Praise God!

Together, they decided to restart their lives and form a new village just outside of town. They parceled six acres of land into enough plots for thirty-one families to build a small home. On one acre, they erected a tent for the church and dreamed of the day when a building would stand in its place.

Still, food was Thiha’s number one priority. They needed to sow seeds to start gardens, but what food would sustain them until their crops were ready for harvest? That could take months, and they would surely starve by then.

In the midst of this crisis, Thiha’s dizzy spells returned. In one vicious attack, he lost consciousness. He and his family traveled hundreds of miles to a hospital for a diagnosis. There was none. Doctors had no medications to help him, no solutions. They gave Thiha something to make him comfortable, and, with time short, sent him home to be with his family.

With only days until the village food supply ran out, Thiha was consumed with worry. His family had already endured so much, only to be faced with starvation. And there was nothing he could do to help them. He prayed God would find a way, one last time.

You heard Thiha’s prayer. Word arrived in the village that the food donations you purchased were on the way. It would be enough to last the village until crops matured. His family would be saved.

That night, Thiha gathered his family around him. He told his wife and children that even though he could no longer help them, they shouldn’t lose hope. God was faithful. God would provide. When he was gone, they could trust in God.

The next morning, all the villagers circled around Thiha’s family as they buried him. Hours later, oxcarts bearing your food donations rolled into the village. Supplies were dispersed without conflict. Each family received more than enough.

In spite of their grief, Thiha’s family celebrated God’s devotion. Thiha had been right. God was still there, even if Thiha wasn’t.

God’s timing is miraculous. Your timing was miraculous when you generously gave to help Thiha’s village. Global Hunger Sunday is October 14. As a church, pray for the millions who suffer from hunger, and then give together to help end their plight. One hundred percent of your donation will go toward hunger needs and the effort to bring global hunger relief.